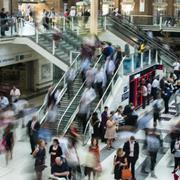 AMF — Tomas Flodén  has been appointed as the new CIO for the SEK590bn (€56bn) Swedish pension fund AMF. Currently head of staff and vice president at the Stockholm-based fund, Flodén is replacing Javiera Ragnartz in the top investment role.

Ragnartz is leaving the company for a new job as chief executive of SEB’s subsidiary SEB Investment Management, where she will also be taking charge of the bank’s investment activities. Ragnartz has been CIO at AMF since the spring of 2017.

Flodén has previously worked as head of staff and chief economist at the Swedish Financial Supervisory Authority (Finansinspektionen) and has also worked at the Swedish central bank. He will take up the position of CIO at AMF in April and Ragnartz is due to start at SEB in the summer.

Unilever – Willy Westerborg has started as finance and risk director at the Dutch general pension fund of Unilever, which comprises its pension funds Forward and Progress. She succeeds Michael Kaal, who was appointed managing director for fixed income at PGIM Netherlands in November.

Westerborg joined from ABN Amro, where she left as cluster head of modelling review and calibration. She has been a board member of the €20.5bn ABN Amro Pensioenfonds since 2013 and is a trustee at Vervoer, the €26bn sector scheme for private road transport.

He has led AXA IM’s UK operations since January 2016, and was previously the company’s chief risk officer. He joined in 2001 having worked for a number of companies as an analyst and portfolio manager.

Schroders – The UK listed asset manager has appointed Deborah Waterhouse and Leonie Schroder as directors, effective from 11 March 2019. Waterhouse is currently chief executive of ViiV Healthcare, while Schroder is active in the charity sector and is part of the Schroder family.

The pair replace Robin Buchanan, who is to retire in May, and Bruno Schroder, who died last month.

Aviva – Maurice Tulloch is the UK insurer’s new CEO, succeeding Mark Wilson. Tulloch has worked at Aviva since 1992 and has been CEO of its international business and its UK and Ireland arm.

Separetely, Aviva Investors, the insurer’s global asset management unit, has hired Stephen Castle as head of UK consultant relations. Most recently he worked at Pictet Asset Management and before that at Legal & General Investment Management.

Ortec Finance – Godert Burghard has been named chief commercial officer as of 1 March. As a member of the executive team, he will be tasked with worldwide expansion. Ortec said that Burghard had ample international experience in portfolio management, gained at BT Global Services and digital security firm Irdeto.

Bernische BVG- und Stiftungsaufsicht (BBSA) – Susanne Schild has been appointed the new managing director of the Swiss supervisor for pension funds and foundations in the canton of Bern, and pension funds based in Freiburg.

Effective 1 October, she will replace Hansjörg Gurtner, who is retiring after 10 years at the supervisory authority. Schild currently works for comPlan, the CHF10.4bn (€9.3bn) pension fund for the telecommunications firm Swisscom. BBSA oversees more than 1,200 institutions with total assets of around CHF204bn.

SNS Reaal – Margreet Oostenbrink has started as independent chair of the €3.4bn pension fund of SNS Reaal. She succeeded Han Thoman, who stepped down after a six-year period.

Oostenbrink is a former director of pension management at Syntrus Achmea. Since 2015, she has been working as an independent trustee and adviser. She is also a member of the supervisory boards at BpfBouw, the €58bn sector scheme for the building industry, and the €358m corporate scheme of Rockwool.

BMO Global Asset Management – Christy Jesudasan has joined the asset manager as director of institutional fiduciary solutions sales in the UK as BMO seeks to increase its footprint in the UK market. Jesudasan has previously worked in the fiduciary businesses at Kempen, MN and Mercer.

Andrew Evans, Smart Pension co-founder and CEO, said: “Paul has extensive expertise in the UK’s pension industry spanning two decades and at a very senior level.  His deep understanding and impressive market influence will be key as we evolve into a leading player in the wider DC marketplace.”

Barnett Waddingham – The consultancy group has hired Rosie Marsh to its actuarial consulting team. She was previously at JLT, where she had been a scheme actuary and client relationship manager for 13 years. She has also worked at Mercer as a consultant.

Avida International – Beatrice Herrmann has joined the German team of Avida International as a senior consultant. She has spent more than 25 years advising pension funds in roles at Mercer, Commerzbank and Allianz Group. She is a former managing director of Mercer’s German group trustee, which is the largest group trustee in Germany offering pension protection in case of insolvency.

Muzinich & Co – Archie Beeching has left the Principles for Responsible Investment (PRI) to join corporate credit-focused asset manager Muzinich as director of responsible investing, a newly created role. He worked at the PRI for seven years, initially leading on fixed income and latterly as head of private markets.

Ledderhof joins as a responsible investment manager, having previously worked at the environment ministry in Canada. He has also worked as a strategy manager at the Carbon Trust in London.

Dreyfus and Mooij join as senior engagement associates. Dreyfus was previously at Sustainalytics where she was a client relations manager for Scandinavia. Mooij recently completed a PhD on ESG integration at Oxford University and has previously worked as an investment analyst at Ownership Capital.

LaSalle Investment Management – The $59bn real estate asset manager has appointed Karen Brennan as CEO for its European business. She is currently head of custom accounts in the Americas for LaSalle.

Brennan succeeds Simon Marrison, who is to become the group’s chairman. He has led the company’s European arm for 12 years. The transition will take effect from 30 June.