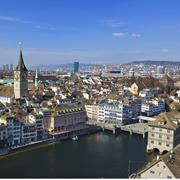 Swiss investor GAM’s head of investment Matthew Beesley has decided to leave the company, it announced this morning.

It said his role would not be replaced because of his successful work restructuring the investment team.

His business management duties will instead be taken on by the respective heads of GAM’s two investment groups, while group chief operating officer Steve Rafferty will assume Beesley’s responsibilities for front office controls and trading.

GAM said that as Beesley did not manage any client money at the firm his departure would not have any impact on the investment management of its funds or mandates.

The Zurich-headquartered company said he would continue to work over the coming months to ensure a smooth transition.

GAM is seeking to return to growth after losing nearly CHF30bn (€27bn) in assets in the wake of the suspension of the head of its absolute return bond team in 2018 and subsequent liquidation of the funds. Group CEO Alexander Friedman left a few months after Tim Haywood was suspended and Friedman’s replacement, Peter Sanderson, was announced in July this year.

Beesley joined GAM in March 2017 and was appointed to the group management board in September 2018. The role of group head of investments was created around this time, with Beesley stepping into it.