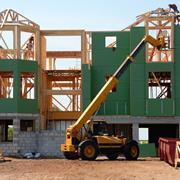 The Netherlands’ industry-wide pension fund for construction workers, BpfBouw, is eating into its funding surplus because its contribution rates were set too low, according to its chair.

Contributions for the construction scheme will have to increase as they do not cover the running costs, the board said in its 2018 annual report. Unions and employers in the construction industry would have to agree on a new funding arrangement, it said.

“We cannot continue like this,” said Mieke van Veldhuizen, chair of the board of the €52.8bn scheme, who represents employees.

According to the annual report, BpfBouw’s coverage ratio fell by approximately one percentage point last year, although it subsequently rebounded to 115.7% at the end of March 2019. A declining coverage ratio reduces the chance of pensions being indexed.

The scheme has not been able to raise pensions in line with inflation for years. As a result, pensioners have lost around 9% of the purchasing power on their pensions.

“It is up to social partners to determine the contribution level,” Van Veldhuizen said. “It is up to us to determine whether we can manage pensions in a balanced way. We have stated that we cannot go on like this for years. Because of the low contributions, we are eating into the coverage ratio and thereby disadvantaging pensioners.”

BpfBouw has added its voice to those of metal and engineering sector funds PME and PMT, which have already warned that the current contribution levels are too low and should probably rise next year. The only alternative to a contribution increase would be a reduction in accrued pensions.

The effects of a planned new pension system – which is still being hotly debated in the Netherlands – are difficult to estimate. Until an agreement is reached, the current rules need to be applied.

BpfBouw is the fourth-largest pension fund in the Netherlands and the only one of the Dutch ‘big five’ that is not at immediate risk of having to lower its pension payouts, due to its healthy funding position. After years of stagnation, the scheme has been able to partly index pensions in the past couple of years to keep up with price inflation.